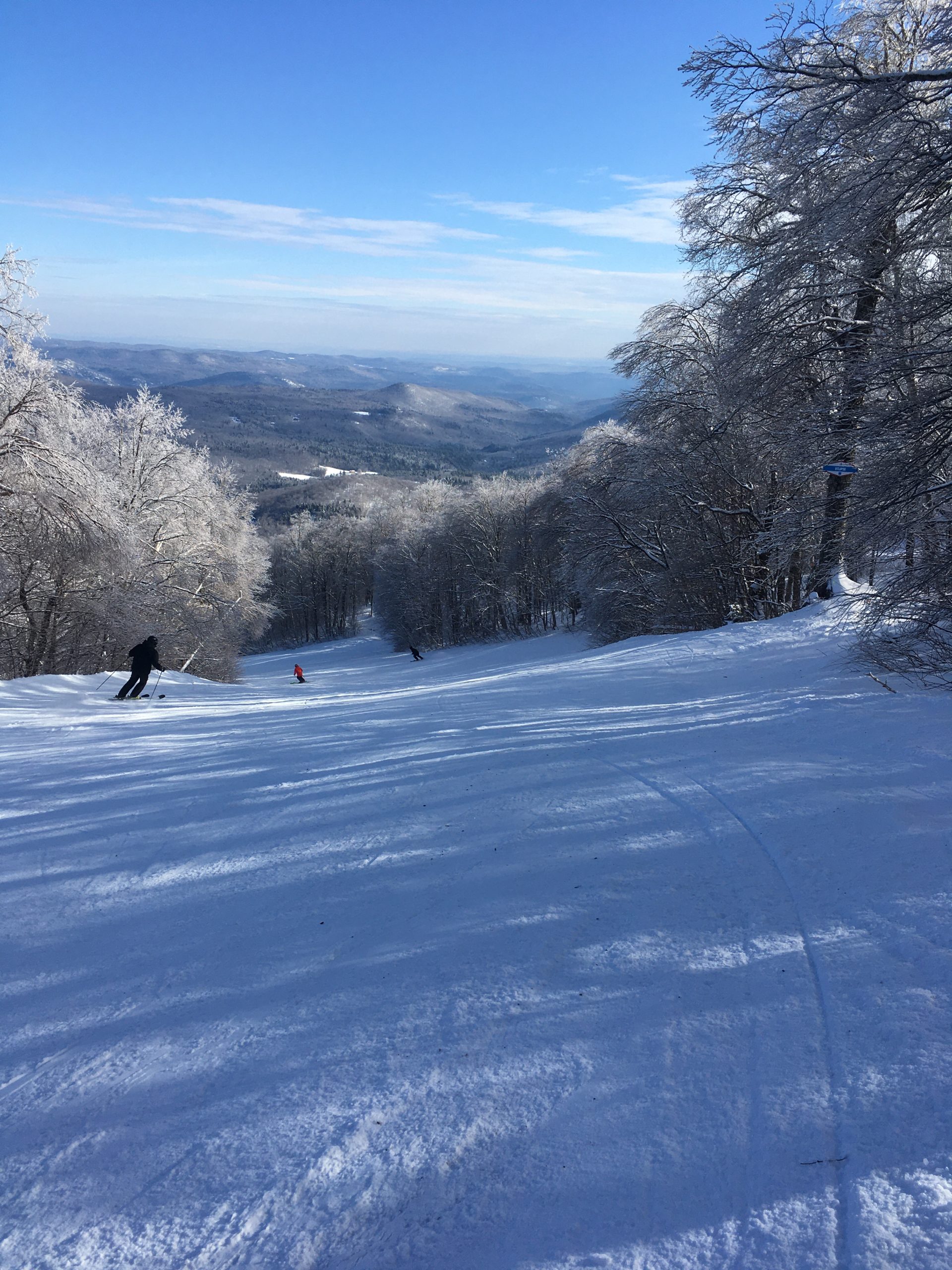 I was at Stratton taking another lap down Lower Downeaster, the trail you see pictured above. My feet were tucked into a pair of Dalbello DS 110 boots. Those boots were clicked into a pair of Volkl Kanjo skis. And I was loving life.

Towards the end of last ski season I found myself struggling a bit, and having too many days coming off the slopes feeling defeated. Or at least confused about why things weren’t clicking like they always used to. Skis didn’t respond like usual. Or worse, they seemed to have a mind of their own, wanting to go somewhere other than I wanted.

This season started off the same. I knew the reason. I just didn’t want to face it.

As I cruised into my mid-60s, I knew that I wasn’t as strong as I was a decade or so earlier, and what strength there was ran out quicker. And it took longer to recover that spent strength. Sure, I could ski in my Dalbello DS 130 boots atop the Blizzard Quattro RS skis, and ski really well. But after a couple hours of euphoria on that pairing, things degenerated. Rapidly.

Skiing is my winter release. The snow covered slopes are where I bleed off stress, forget the rest of the world and its associated problems, declutter my mind, and simply relax. To the max.

I needed to find a new set up that wouldn’t sap strength quite as quickly and would let me stay in that “happy zone” for as long as I wanted or needed. So as this season progressed I skied various demo skis Ted has available at Avie’s Ski / Sports. I really liked the Nordica Dobermann Spitfire 76, as well as Blizzard Brahma 82, and Volkl Kanjo.

The Spitfire 76 skis were great carving skis, and they were a blast on the groomers. But they were a bit heavy, and stiffer than what I felt I was looking for. And maybe a bit too skinny. If I went that direction, why not just keep the Quattro RS skis?

The Brahma 82 skis were great all over the mountain, but again were a bit heavier and stiffer than desired. What I was gravitating towards, it seemed, was something lighter and livelier.

Kanjo was great all over the mountain, had a lot of pop, and were incredibly light. They seemed for me to be the most fun of the three. But were they really the ski I was seeking? I thought they very well might be.

So, I bought a pair. I pondered bindings, and Ted suggested Marker Squire (instead of Griffon) to keep things really light. I also picked up a pair of Dalbello DS 110 boots.

I sharpened the skis so they would cut into a firm, hard-pack surface, and waxed and buffed them to a perfect high gloss shine. Then I took the new set up to Stratton to give them my undivided attention for the entire day.

Like I noted earlier, I was loving life. I skied until late morning without feeling fatigued and beat up. I took a short break to hydrate and refuel. Then went back out for another couple hours of fun with my new best friends.

I will miss the exhilaration of tipping down a steep slope with feet in super stiff boots clicked into race-worthy skis. That outfit is now in the hands of a younger man who will put them to good use in actual race conditions. So I feel good knowing those great skis and boots will continue to do what they do so well.

I admit, I am starting to feel my age. But that doesn’t mean giving up something as fun as skiing. It just means I need a new way forward that adjusts better to a new, aging, and changing me.

If fact, out on the slopes in my new set up I feel like a kid again, discovering the magic of sliding downhill over snow in the cold mountains on a pair of sticks with an enormous smile plastered on my face.

The new ski gear available today is simply magic. Boots are incredibly light, and with GripWalk, easy to walk in. Skis are available in so many configurations that it is truly impossible not to be able to find a pair of skis that make you feel like it’s the first time out all over again. Except this “first time” you will actually spend time skiing instead of falling!

And there are many options for trying before buying. Demo skis are there for the trying. Talk to shop employees who have skied the skis—like those at Avie’s—and let them help you find your new best friends.

Same for ski boots. New boots are so light, so warm, and so easy to get in and out of, that you will wonder why you didn’t upgrade sooner. No matter the size of your foot, there is a ski boot width and stiffness combination that will put and keep that smile on your face.

A Word About Volk Kanjo

For me, Volkl Kanjo paired with Dalbello DS 110 was the answer. For you it may be some other ski, some other boot. Regardless your age, if you are looking for a really lightweight, lively ski that holds turns wonderfully, carves as well as they do short quick turns, Kanjo is a pretty darn good choice.

I even took them over a couple of ungroomed trails to see how they would handle more lumpy, crusty, crummy conditions. They didn’t chatter or slip. They sliced their way through the crusty crud, loving every moment. And so did I.

Though I haven’t taken them there just yet, I think Kanjo will play nicely in both the bumps and in the woods. These are a lively set of sticks that perform well beyond their price point. There is a demo pair at Avie’s if you are considering getting a new pair of skis.

A Word About Dalbello DS 110

The new Dalbello DS line of boots are phenomenal. For a 4-buckle overlap boot, feet go in and out about as simply and easily as can be imagined. Not like a pair of slippers—lets’ be serious! But wicked easy.

The change from a 130 to a 110 stiffness boot was not as traumatic as anticipated. The response from the ski is not as forceful or immediate, but I still was able to drive a ski—even stiff skis like Nordica Enforcer—without much problem (other than taking more effort, as is normal regardless the boot stiffness).

Bottom line? No matter age, ability, or desire, there is a match up of boots and skis that will be your soul mate. All you need to do is explore some, and find them.

It was great to wake up this morning and see a nice heavy coat of frost. It has snowed a couple of times up north. Ski areas are working snow guns overnight as they begin to build up the base we will ski and ride on this season. Killington and Sunday River have lifts spinning taking eager beavers up for some early season turns.

If you haven’t turned thoughts towards skiing and riding, this ought to help you get focused. Last post focused on What’s New from Blizzard and Tecnica, and the one before that on new Capita, Union, and thirtytwo snowboard gear. Check those out if you missed them, but first read on as we check in on Volkl and Dalbello. END_OF_DOCUMENT_TOKEN_TO_BE_REPLACED

Snow is falling, sno-cats are crawling, the slopes are calling. The slow leak of adrenaline into your veins is speeding up now that the leaves and temperatures have dropped. If you are thinking about new skis for the 2017 season, then this post, and a few more coming after this, just might help you think through the question “What’s the right ski for me?” END_OF_DOCUMENT_TOKEN_TO_BE_REPLACED 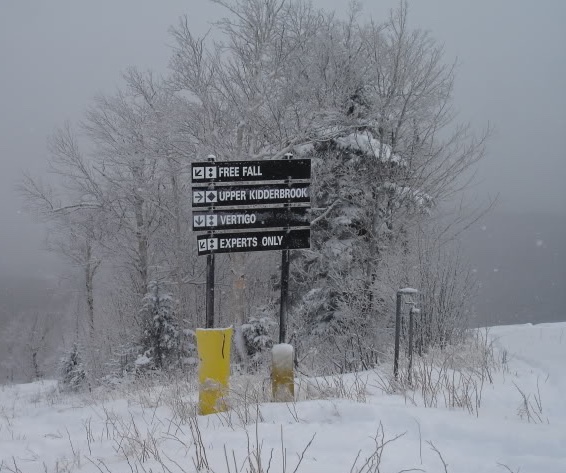 I hit Stratton for a mid-week day of play yesterday, and I can say conditions are good to great, and improving on a day-to-day basis.

While an occasional patch of glacier ice was seen poking through the surface cover, they were few and far between, and only on the steepest of pitches that traditionally get scraped off. END_OF_DOCUMENT_TOKEN_TO_BE_REPLACED