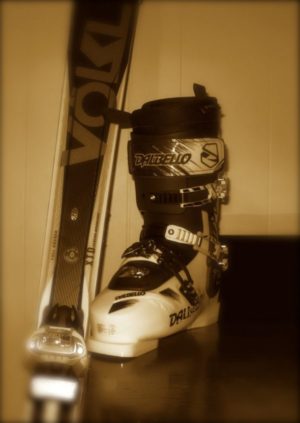 It was great to wake up this morning and see a nice heavy coat of frost. It has snowed a couple of times up north. Ski areas are working snow guns overnight as they begin to build up the base we will ski and ride on this season. Killington and Sunday River have lifts spinning taking eager beavers up for some early season turns.

If you haven’t turned thoughts towards skiing and riding, this ought to help you get focused. Last post focused on What’s New from Blizzard and Tecnica, and the one before that on new Capita, Union, and thirtytwo snowboard gear. Check those out if you missed them, but first read on as we check in on Volkl and Dalbello.

For 2018 Volkl has introduced a new “3-D Glass Inlay” system into some of their higher end skis, mainly in the RTM series. The idea here is to reduce weight in the ski by reducing the amount of metal. That gets replaced with a new fiberglass formulation that provides great stiffness without extra weight. I have skied the Volkl RTM 84 for several years—they are my “go to” skis—and I didn’t see much difference in performance between mine with full titanal inlays and the new 3-D Glass Inlay skis.

But that’s a good thing!! It means the RTM series of Volkl skis remains a hard-charging, super grippy all around ski. Volkl did introduce a new RTM 86 model, which is just a touch wider than the RTM 84 model. Because of the glass inlay, they are pretty light, but still perform incredible everywhere on the mountain. I continue to give all the RTM series skis a big “Thumbs Up.”

Volkl also came out with a new RTM 76 Elite model. All the metal has been removed, leaving only a very lightweight wood core—no 3-D Glass Inlay in this model. They are very lightweight, and so pretty quick into and out of turns. While they didn’t have the same grip as their heavy-weight cousin RTMs at higher speeds, the 76 Elite would be a great ski for an advancing intermediate skier who wants to hone carving and cornering technique.

Also new for this year is the Volkl Kanjo, an 84mm at-the-waist, free ride ski. At first blush I thought—”This is just a skinnier Kendo.” I was wrong. They are very different skis. Kanjo has a new titanal band layup that adds stiffness only in those places where needed. This keeps them light but not letting them lose stiffness. The result is a very, very playful, responsive, hard-gripping, fun-ripping ski. They even carve pretty good. I found Kanjo to be one of the most fun skis I got to try at the On Snow Demo this past spring.

You women still have Kenja and Yumi, which have not been messed with for this season. And a good thing that is as they have been, and continue to be, a pair of great sticks for all around the mountain fun. Overall, women’s skis from Volkl really didn’t change at all for this season, largely because they changed so much for you ladies last season. Not to worry, the 3-D technology, and I’m sure other even newer technologies, will creep into Flair and other Volkl skis in the near future.

And now for Dalbello Boots

Dalbello has reconfigured their ski boot line by clumping similar boots into “families” based on performance. For instance, their intermediate level boots are all clumped within the same family name, and the family has a variety of flex and widths options. So, if you want an intermediate level boot you would look in the Avanti family. Then you would find a flex level that you want, and then find the right width for your foot. This makes boot shopping much more logical, and one heck of a lot simpler for both customer and boot fitter!

A unique feature of many Dalbello boots is the 3-buckle Cabrio technology. The debate between 3- and 4-buckle boots has waged long and fierce. I used to fall on the 4-buckle side, based on the premise that you lost too much performance going into a 3-buckle system. I say “based on the premise” because I hadn’t skied a 3-buckle boot—other than a quick demo here and there. Until last year, when I decided to swap out my 4-buckle Dalbello Scorpions for a pair of 3-buckle Dalbello Kryptons. I had to see first hand so that if nothing else, I could give Avie’s customers something more than regurgitated opinions. Plus, I was curious.

Once I got the Krypton boots tweaked for my feet—custom insoles and a couple of rounds of heat fitting to properly seat my foot—I can say I have never loved a ski boot better. The 3-buckle design makes these a snap to get into, and easy to slip off at the end of the day. No more exhausting end-of-day tug-of-war to get off, no more early morning sweating and cursing to jam my feet in.

Is there a difference in performance?

All I can say is that if I lost any performance in moving from 4- to 3-buckle ski boots, I haven’t noticed. In fact, I think my skiing actually got a bit better in the Krypton boots. But that could be for a lot of reasons other than 3- or 4-buckles. I honestly feel that it is because the Krypton boots really hold my heels snuggly in place, allowing little to no upwards slip. The Dalbello boot rep says the 3-buckle Cabrio system is designed to lock down the heel. Who am I to argue?

The point here is, stop in and try on a pair of Dalbello boots with the 3-buckle Cabrio design. I am positive you will like the ease of entry and exit. And after you clomp around the shop in them for 15 or 20 minutes, you may decide you want to take them for a spin for the season.

And here is my one best boot fitting tip for you to consider—if you have your feet in a pair of boots that fit and feel really good, except for maybe one little niggling thing that doesn’t feel quite right—ask whoever is helping you to drop in a custom insole. You may just get from “Hmmm, these boots feel pretty good!” to “Aaaahhhhhhh. Sublime.”

That’s it from me for the Volkl  and Dalbello line up for this season. Stop in at Avie’s and check out the Volkl skis and Dalbello boots, and get yourself ripped and ready for the slopes.