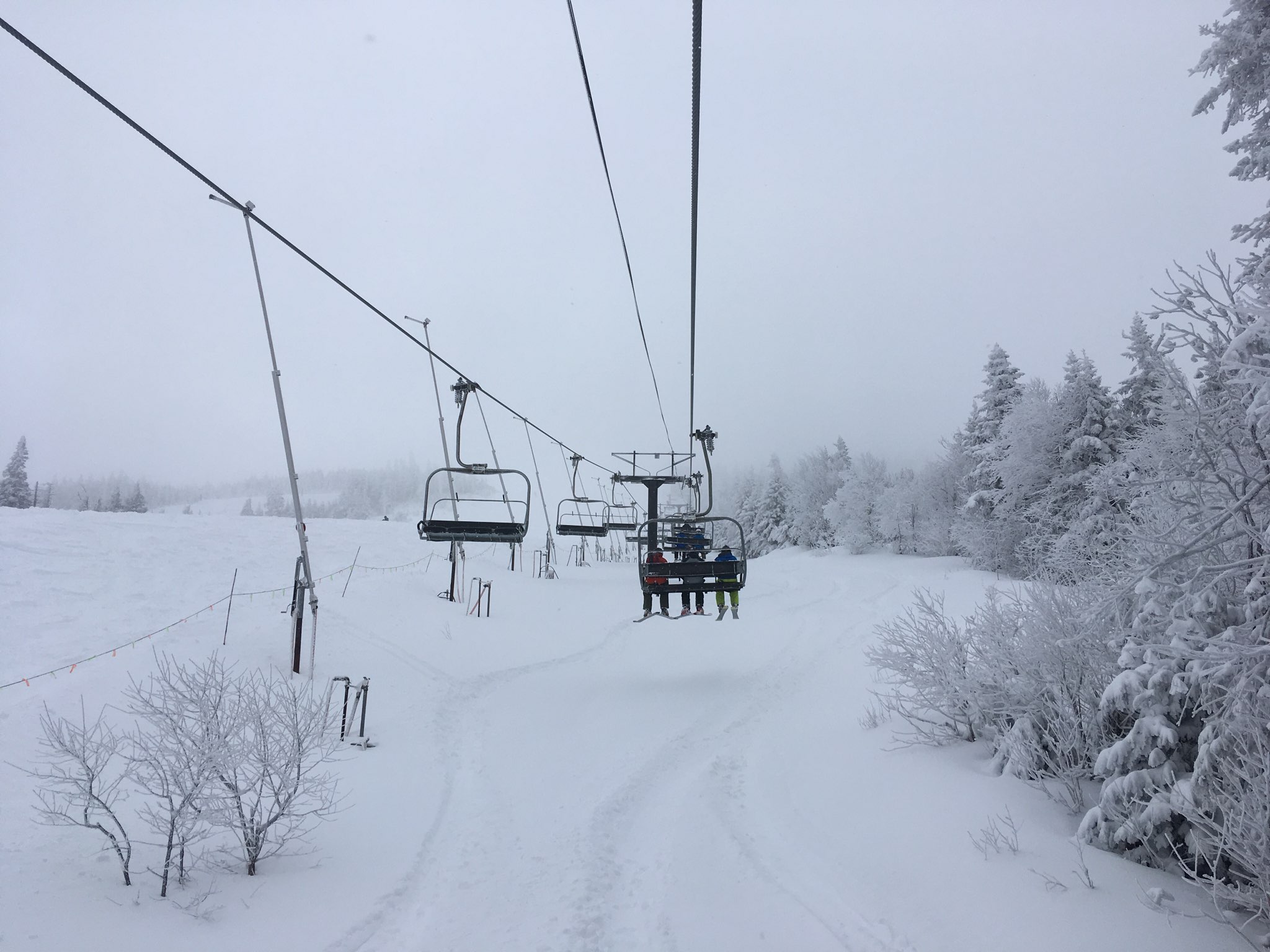 The urge to ski has been powerful this late fall. The ton of snow that fell in Vermont and New Hampshire in late November made that urge, well, more urgent.

But life got in the way until this past Thursday, December 6th. I left the house at 5:15 AM and was on the slopes at Mount Snow in Vermont at 9:00 AM when they started sending eager skiers and riders to the summit.

I won’t sugar coat the conditions. They were not great. But then again they weren’t horrible either. It was early season ski conditions in New England.

Talking to many of the regular “geezer squad,” as they tended to call themselves, I heard a lot of “You shoulda been here last week.” And while I “shoulda,” I unfortunately “couldn’ta.”

What I can say, is that it felt absolutely wonderful to be out on the mountain feeling the force of gravity yank me downhill on a pair of skis. The top half of the mountain was under blizzard conditions. Snow guns were roaring full blast everywhere you looked. And it was snowing. And it was windy. Visibility at ground level was challenging at times. Snow “whales” materialized from the swirling white chaos here, there, and everywhere.

I lapped “Ridge” multiple times, stretching out the quads and waiting for muscle memory to kick in and take better control of the skis. They didn’t seem to be remembering much.

In the swirling blizzard at the summit I took a wrong turn onto an ungroomed trail. Which I quickly regretted. But I survived the frozen lumps and bumps and spots of wind blow barren ice. All good, but more tiring.

As my legs were feeling the sting, it being first time out for the season, I figured I better dial it back a bit and relax. So I started lapping “Long John,” just letting the quads cool down and letting the muscles do what they know how to do if left to their own devices. And they began to remember what to do.

No, I never went to see what was open on the North Face. My legs weren’t quite ready for that adventure. It’s early in the season. No sense getting stupid and pushing the boundaries. No yet anyway. Later in the season that will happen.

While conditions for my seasonal debut on the slopes were less than ideal, it was great to be back on a chair lift chatting with like minded folk out playing in the snow. It was great to hear the click and swish of skis riding over snow, crust, and ice. And it was great to see the landscape covered in white once again.

It was less than great when I got out of bed Friday morning. My quads quickly and forcefully reminded me of what I did the day before. But that’s the price that must  be paid. And I gladly pay it each and every season. That pain is the gateway to a season of fun in the snow.

Next time, “the day after” muscle burn will be a bit less. And by mid-January that won’t even be a memory. Except on those days when the boundaries get pushed.

For me, the 2019 ski season is now in play. I hope to make my next “muscle torture” event this coming week. Before the muscle recovers too much. That just extends the break in period.

I hope your ski and ride season has started as well. If not, the slopes are ready for you. Judging by the extent of snowmaking going on, and the number of whales ready to spread across the slopes, things should be in good shape for the weekend. And beyond.

We have some consistent cold in the forecast, with a bit of snow here and there along the way. Get your gear together. Stop in at Avie’s Ski / Sports to pick up what you need to get you going. Then go.

Hope to see you on the slopes.