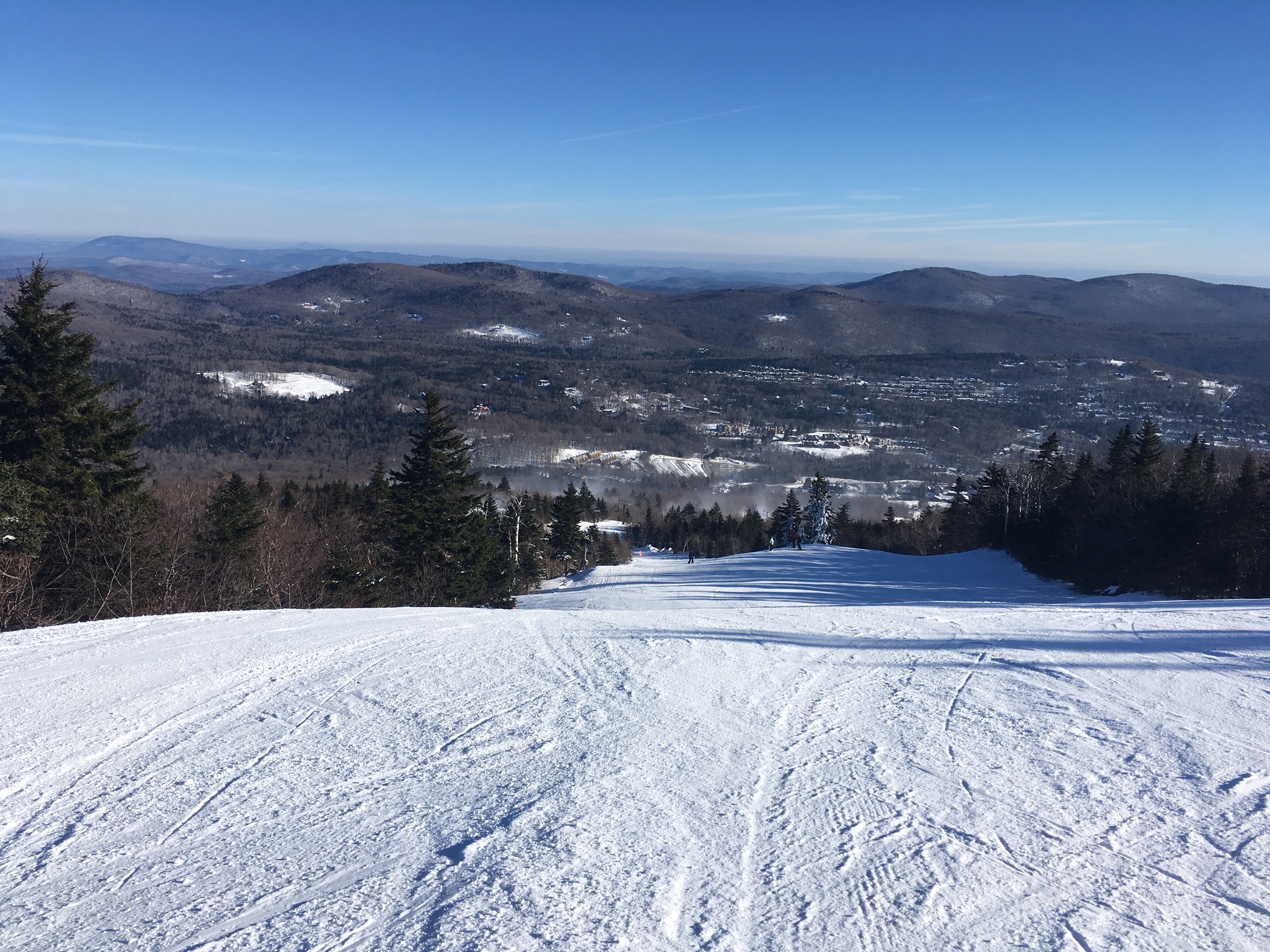 They remembered! The muscles. The legs. The arms. The torso. They all remembered how to get down the slope intact. Gracefully. I had a Skier Rewind, and it was a good one.

I returned to Mount Snow today for that second round of “muscle torture.” Last week at Mount Snow, my first time out for the season, they didn’t remember how to ski very well. While not performing quite as bad as a rank beginner, it felt like it after darting down the slopes on race skis at the end of last season.

It was 3 degrees at the base when I arrived at 8:30 AM. And there was a thermal inversion. That means the summit was clear but the base was choked in a cloud. It was a fluffy cloud. So it was okay. Just weird. But there wasn’t a hint of wind and not a cloud to be seen. Except that one snuggled up at the base.

In other words, it was a near perfect ski day

All the new snow has been man made. At 3 degrees that snow was hard and fast. And it stayed that way. Maybe that was the queue my skier muscles needed.

After the first run, I could just feel that it was right. 100% correct. An A Plus. And because everything else clicked into place, the Volkl skis thought they were race skis. They cornered sharp and didn’t let go. I had a blast all morning long.

While there was still limited terrain available, there was quite a bit to pick from. There were snow guns firing on a couple of trails. After one run through them that iced over the goggles I stayed on those without. I liked the hard and fast corduroy. It was too sweet to ignore.

I could only stay for a long morning. Which was probably enough because I was beginning to feel the adrenaline ebb and the muscle fatigue ramp up. If I had all day I probably would have taken a breather then hit the snow again. And it probably wouldn’t have been as phenomenal as the morning.

I left on a high note. A really high, high note. Which of course makes me want to do it all again tomorrow. Despite the fact that I absolutely know that I can’t. But I still want to. Skiing sometimes makes me revert to an impudent 8 year old that wants what he wants, and wants it right now!

As a grown up, there are realities to deal with

Today however, was a banner day. It was a day as great as the late season days last year when I professed my love to a pair of race skis. Today, I have what I call the “skiing duck” feeling. Anything bad coming along is going to roll off me like water off a duck. Bliss. Euphoria. Cloud Nine. Rapture. Ecstasy. Take your pick. They all describe the feeling left behind after my day on the slopes at Mount Snow.

So do yourself a favor. Cheat and ditch work. Or whatever responsibilities you have. Let someone else deal with them for a day. Steal yourself away to slopes covered in snow. Rejoice in the click and clack of skis running over the hard and fast snow. Laugh at the “Whoops” that you hear from those sliding down below the chair as you return to the summit. Breath in deep of the crisp, cleansing air of the high New England peaks.

Because if you do this, the following day you will meet all those pesky responsibilities with a huge smile plastered on your face. And that can never, ever, be a bad thing.

For me? The following day? I wanna go back. With the race skis…