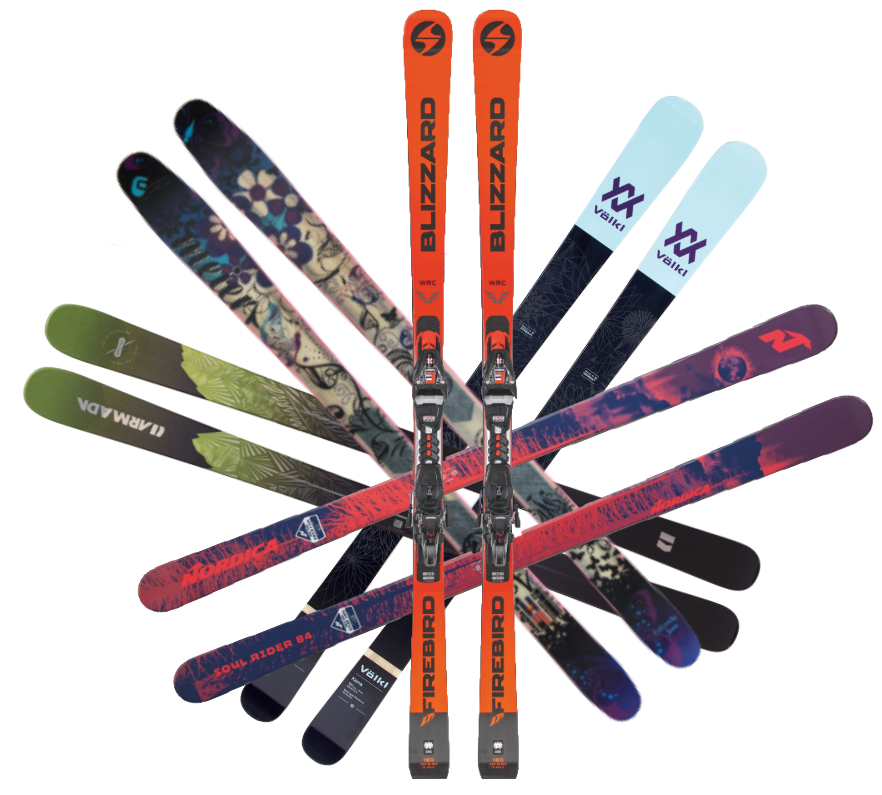 The ski scene for 2019 is an exciting one. A shift from “big & fat” skis is underway. Though the big-fats aren’t actually going away. They just are not a focal point for the upcoming season.

And that’s a good thing for us Eastern skiers. Sure, we get powder days. And for those lucky few who live next door to a ski area, and have the opportunity to take advantage of those powder days, big and fat skis should be on-hand.

But for most of us who frequent Avie’s Ski / Sports, we find ourselves confronted with groomed slopes. Which is not such a bad thing. But it does mean that big and fat skis aren’t really a “go to” ski. Of course you can ski them on the groomers. But it’s not the forte for powder skis.

What appears to be a trend throughout the industry for 2019 is a focus on slimmer models of some of the big-fat skis. Another trend is taking these medium-width skis and making them a bit more “carve worthy.” And last, though hardly least, is a resurgence of full camber race skis.

I own a pair of Nordica NRGy 90 skis, so I will use them as an example. The NRGy 90s are light, have lots of “pop” in them, and are just wide enough to float powder pretty good. Not great, but pretty good as long as the fluff isn’t really deep.

Nordica changed them to the Navigator series a season or two ago. The major change was redistribution of the titanal mesh, modifying it to provide a bit more pop without reducing stiffness. The Navigator series also offered new widths and new top sheet graphics.

For 2019, Nordica altered the side cut a bit, so that the ski carves a bit better on the groomers. I jumped on several pair of Navigator skis as an Avie’s Ski Tester, and liked what I found. The newly designed Navigator skis retained all the fun characteristics that I like in the NRGy series—light and lively, powder float-worthy. But, they tipped easier into the groomers and carved a bit better. And that’s a really nice characteristic. Especially for Eastern skiers.

Other ski brands that you will find at Avie’s Ski / Sports—Armada, Blizzard, and Volkl, are messing around similarly with their ski models. Volkl Kendo and Mantra have been retooled a bit, and Kanjo hit the market as a new intermediate width ski last season. Blizzard came out with the Rustler series. Armada was already in this mode, but their new Tracer series of skis fits this same pattern of improved carving ability.

With these changes, a true “One-Ski” that does it all on the mountain is a near reality. There are and always will be some trade offs, but by and large some of the new all-mountain skis get “one-ski” within reach.

One of my favorites as an Avies’ Ski Tester this past season was the Blizzard Rustler 9. While this ski is 92 mm at the waist, they ski quite easily. Even on the groomers. In fact, they carve quite nicely. And because they are wide, they float pretty well in powder, which is helped along by the bit of tip rocker Blizzard designed into them. And they bash late day crud without hesitation.

Volkl Kanjo and Kendo are similar, but not clones. Both play well all over the mountain. Kanjo is a bit thinner at the waist than Kendo, making it a bit more fun overall on the groomers. Both are great choices for a “one ski” approach.

And let’s not forget Armada, who offers the Victa and Victus ski series. These skis provide some really fine all mountain performance for a very reasonable price. I have skied the Victus several times, and they are just great skis from start to finish. Light, fun, grippy, and stable. What else might you want?

Or Meier Calamity Jane or Quick Draw. While neither has yet been tested by an Avie’s Ski Tester, both have all the makings of what should be great all mountain skis. We will confirm once we take them north for a bit of play on the slopes.

Carving skis, while not radically changing this season, are overall seeing a bit of reduction in rocker application. That means a resurgence of more camber in the design. Camber underfoot leads to a more playful ski with more “pop” in and out of the turns. Tip rocker continues to be prevalent, making the skis a bit easier to tip into turns. It also gives them a bit of extra “crud busting” power, which is nice late day when the groomers are all a big heaped up, chopped up, smeared up mess.

Another interesting trend seems to be an emergence of race skis. It’s obvious that if you race, then you really would like a race ski. But what if you don’t race? Race skis, no surprise, are outstanding carving skis. Full camber makes these not only great carvers, but great fun carvers! But the emergence of new race ski models is not targeted at World Cup athletes. They are targeted at your average skier that loves to carve the groomers.

Last season I picked up a pair of Blizzard Quattro RS race skis to see what they were all about. See my recent BLOG post titled: “Race Ski.” All I will say here is that if you really love to carve the groomers, and aren’t afraid of a bit of speed, you definitely need to look into a pair of race skis. Avie’s Ski / Sports has several pair of Blizzard Firebird Race Ti skis in stock. There is even a pair available to try out as a High-Performance Demo Rental. Check them out, they don’t disappoint.

The 2019 season sees a big swing in ski boots—check out the recentBLOG post “Ski Boots—Year of the Boot” for the full story.

The 2019 season sees some subtle but substantial shifts in ski design. A bit of a roll back in the Big & Fat category. A new focus on “carve-worthy” skis designed to be more fun on the groomers. An emergence of race skis for those who truly love the art of carving. And maybe a bit of speed.

This change is great for Eastern skiers

All in all, 2019 is a winning season for skiers. Especially Eastern skiers. The emphasis on better carving, and a boost in application of traditional camber, both mean more fun on the groomers. Look for  that “one ski” that plays in the woods but still carves. You just might find it this year.

Whether you need boots or skis, or both. Or need neither but would like an upgrade, 2019 is a great year to take action. The innovations making their way to skiers is phenomenal. Check out the “Skier Need to Know” web pages for SKIS and BOOTS. You may find them helpful in thinking through your choices in a pair of new boots or skis.

Stop by Avie’s Ski / Sports and check out the 2019 ski and boot offerings. Let us help you into a new pair of boots or skis that will “light up” your time on the slopes.

Hope to see you soon.