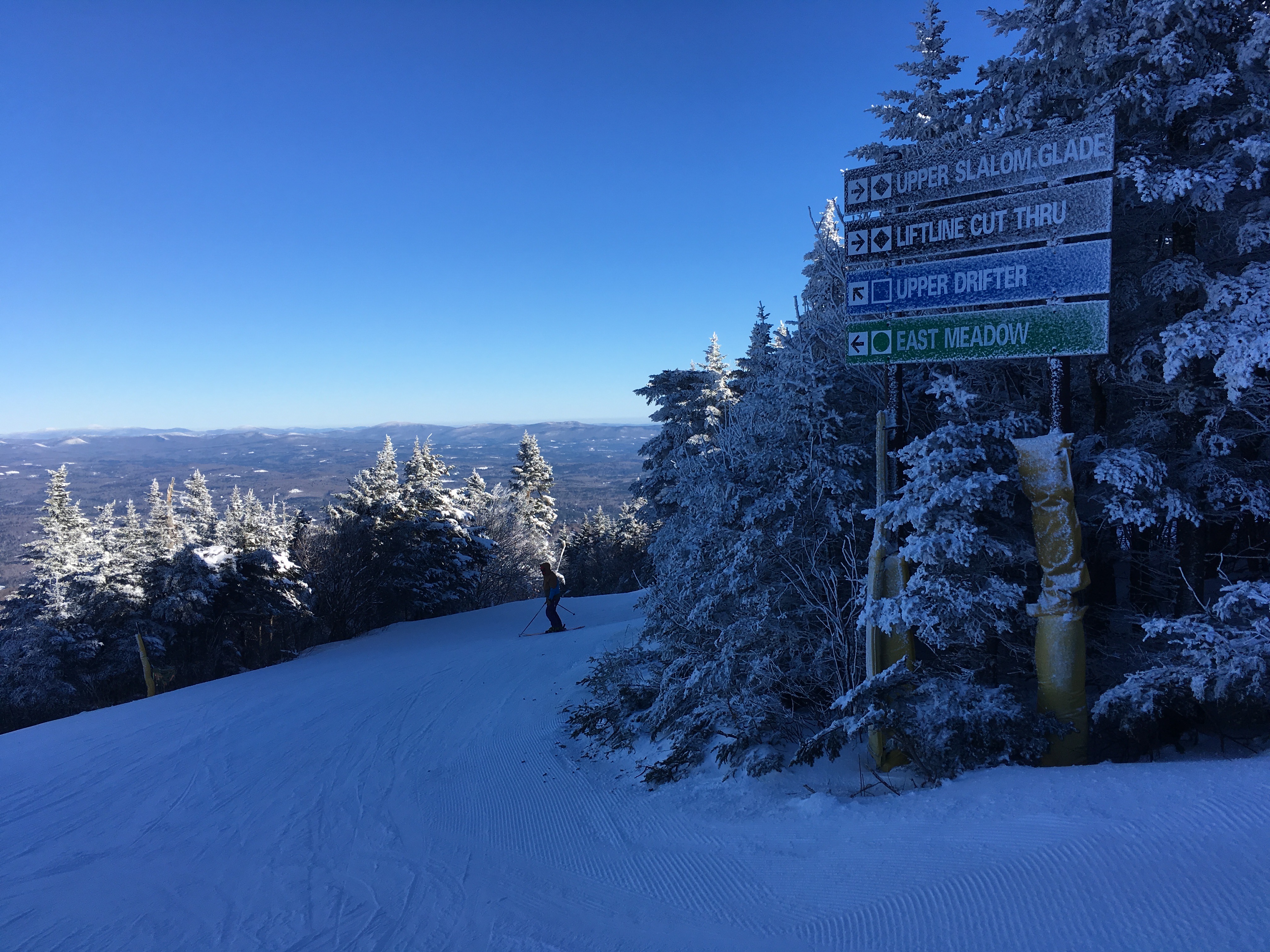 The group from Avie’s Ski / Sports had a blast at Stratton on the January 13th trip north. Conditions were phenomenal. Temperatures stayed in the high teens, but without a breath of wind. Great temps for skiing and riding.

And the sky. Such a beautiful sky. Not a cloud to be seen anywhere. The only thing resembling a cloud were the snow-capped peaks of the Presidential Range in New Hampshire off in the distance to the east.

Ok, great weather. How were conditions?

Incredibly good. Most of the mountain was open, and most open trails were groomed. With no wind, the snow stayed on the trails. The only spot that got a bit nasty in the afternoon was Janeway Junction. Too much traffic always seems to make that spot get scraped to glacier status. But if you avoided that, the rest of the slopes were firm, fast, and snow covered.

The new lift in the Snow Bowl area of the resort is a fantastic addition. The trip back to the summit from the bottom of World Cup now takes about 5 minutes rather than the 15 or so minutes with the previous lift. Better still, few seemed to know it was there because there was never a line. So, you could avoid the long, slow runout back to the base area with a short hop back to the summit. Very nice addition.

Even more surprising were the crowds. Or lack thereof. Yes, it was busy, but the longest wait I had was at the Sunrise Express lift out of the Sun Bowl, where it took about 5 minutes to get on the lift. So there were fewer people on the trails than what I think of as “normal” for a Sunday.

And once the Patriot’s game started, the trails got even more lonely. For those that decided to forgo at least the start of the game, the skiing and riding throughout the afternoon was spectacular.

Starting to get the idea it was a great day? It was. Personally, I thought the snow in the Sun Bowl area was the best, and my favorite trails for the day were Sunrise Super Trail, skiers left as you get off the Sunrise Express chair, and Lower Downeaster, skiers right coming off the chair.

Right at the end of the day, the Sunrise Express lift in the Sun Bowl experienced problems and was shut down for repairs. Fortunately they got everyone off before shutting it down. This left the Solstice lift running, which I hadn’t been on before. It is a sloooooooow lift, but when it’s the only lift, you take it. Fortunately I took it only once, for my last run of the day. I took Big Ben, a novice trail right off the Solstice lift, back to the Sun Bowl lodge. It’s a scenic, winding trail through the woods, experiencing a gentle grade. It pops out of the woods at the top of a big, broad slope leading past the tubing hill.

The sun had been on the slope earlier in the day, which was now in the shadows as the sun was setting. I tipped over the top of the long wide slope, quickly finding out that the sun must have slightly thawed the surface, which then froze over as the sun dipped behind the mountain. For a novice trail, I had a fast ride down the slope back to the lodge. Big carves across the face of the trail, all the way to the bottom, was a fantastic way to end the day.

I was tempted to jump on the lift for one more spin down Big Ben, but opted not. My quads were screaming from a fun afternoon of torture. I decided to let it end on a high note. My quads were very grateful for that decision.

The bus ride back to Westerly was particularly quiet. Everyone was what I call “blissfully exhausted” from a fun day on the snow.

This coming Sunday, the 20th of January, the Avie’s Ski / Sports trip heads back to Vermont to visit the slopes at Mount Snow. Same great price of $99.95. Be sure to sign up by early afternoon on Thursday the 17th to help ensure that the trip will run.

Sure, you can still sign up for the trip after Thursday. But you run a risk of two very bad things happening. First—too many people waited until after Thursday afternoon to sign up, and the trip was cancelled because we thought there wasn’t enough interest. Second—too many people did sign up before Thursday afternoon and there are no seats left on the bus. In the first case, everyone loses. In the second, there is a big number of winners, and one loser.

Don’t be a loser. Sign up before Thursday afternoon

Following Mount Snow Avie’s heads to Loon in New Hampshire on the 27th. On January 30th, a Wednesday, Avie’s Ski / Sports has the first mid-week trip of the season, heading to Okemo. I urge you to be on that bus. Mid-week skiing and riding cannot be beat. Sign up for this trip early so that we know there is enough interest.