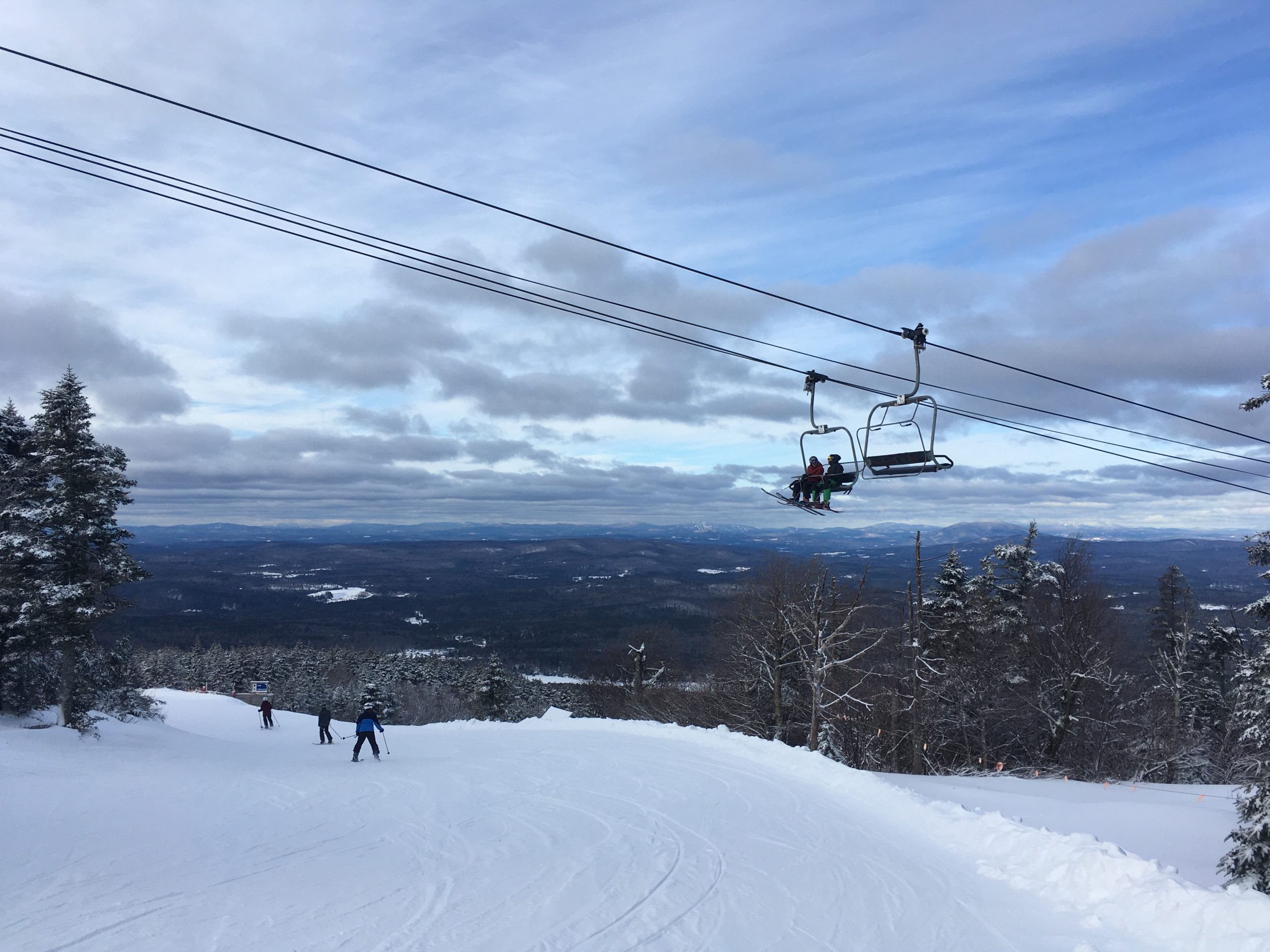 Matt Knittle, the Avie’s Ski / Sports representative for Nordica skis and boots, sent an invite to join him at Mount Sunapee in New Hampshire. The invitation included a day on the slopes trying Nordica gear. It was a great invitation, so I accepted.

The last time I had been to Mount Sunapee was on an Avie’s trip. I went with my new-to-snowboarding daughter who was at that time 13 years old. She just turned 27 this past November.

So it had been a while. With no particular reason other than Vermont destinations felt closer. They aren’t, as I discovered when I pulled into the parking area at 8:30 AM yesterday morning. It took about as long to get to Mount Sunapee as it does to get to Mount Snow or Stratton or Okemo. Maybe even a couple minutes less than Stratton or Okemo. But not enough to be significant in any meaningful way.

I met up with Matt, and jumped onto a pair of Navigator skis to start my day. I wanted something light in weight and fun in soft snow. Mountain ops had groomed, but then it snowed a couple inches post-grooming. That left a nice layer of fluff on top. Not enough to float a ski, but enough to make the first few runs softer and slower.

I had forgotten what a nice ski mountain Mount Sunapee is. The trails are not what you could label adventurous or really challenging. They do however, offer a wonderful opportunity to relax and enjoy well manicured, moderate grade trails winding through the New Hampshire woods.

From The Man Cave

After a few warm up runs on the Navigator 85s, I clicked boots into a pair of Enforcer 88 followed by Enforcer 93 a few runs later. Any Enforcer ski by Nordica is pretty amazing. Just looking at them you can see them oozing strength and power. Tip and turn, slash and skid. They do it all and do it well. Enforcer is a great all mountain ski that has the backbone to give high performance top to bottom regardless the conditions. Nordica hit a Grand Slam with Enforcer. It is the #1 selling men’s ski in the U.S., so I guess they know that already.

I had to jump into a pair of Spitfire 76 RS skis for a couple laps on the beautiful groomers that make up Mount Sunapee. The Spitfire skis are simply put, fun. Full camber makes them very, very lively. Dobermann race ski heritage makes them quick in and out of turns, and very, very “grippy” in those turns. Spitfire 76 RS is one of the more fun front-side skis I have had the pleasure of clicking my boots into this season and last.

Time With The Ladies

Every year I say I am going to ski women’s skis so that I have a better idea on how they relate to their equivalent men’s ski. I then would have better knowledge to pass along to women looking to pick up a new set of sticks. This year I mean it.

I clicked boots into a pair of Nordica Santa Ana 88 women’s skis. I wanted to try out a pair of the 93 mm width skis, but they were never available when I was swapping out one pair for another.

Given that Santa Ana skis are the women’s version of the venerable Enforcer men’s ski, I assumed similarities would be apparent. And they were.

First off, Santa Ana handle incredibly well. While lighter in weight than an equivalent length men’s Enforcer ski, the Santa Ana ski did not wimp out in performance and control. They tipped into turns as nicely, and held the turns without slipping or chattering or misbehaving at all. Because they are lighter, they were much more nimble than the men’s Enforcer counterpart. Which is not really surprising.

On the drive back from the Nordica sponsored event, I had a chance to reminisce on a few things. I was very glad that Matt invited Avie’s to join Nordica on the slopes at Mount Sunapee. I found that I really liked the slopes there, and figure I might try to spend more time at Sunapee in the future. It wasn’t very busy, even by weekday standards, and the slopes are very, very well maintained.

Favorite of the Day

I also realized that my favorite ski for the day was the women’s Santa Ana 88 ski. Because they maintained all the high-performing characteristics that the venerable men’s Enforcer ski is so well noted for, there was no way you could not like them. But when you toss in the extra lightness inherent in the women’s Santa Ana, I found them to be so much more fun because they were so much more nimble.

As a final disclaimer, let it be said that the Enforcer skis I tried out are slightly different than those on the market this season. The Enforcer sticks I got to ski on are the ones that you will see on the market next season. There isn’t a huge difference, but there is some and those nuances in technological changes do make the skis a bit different. But more on that next season.

And the Santa Ana skis are a totally new redesign, technologically, from those on the market this season. Since I did not try out past versions, I can’t point to differences. I can say, if you are in the market for a new pair of women’s skis next season, don’t overlook the Nordica Santa Ana series. They are amazing.