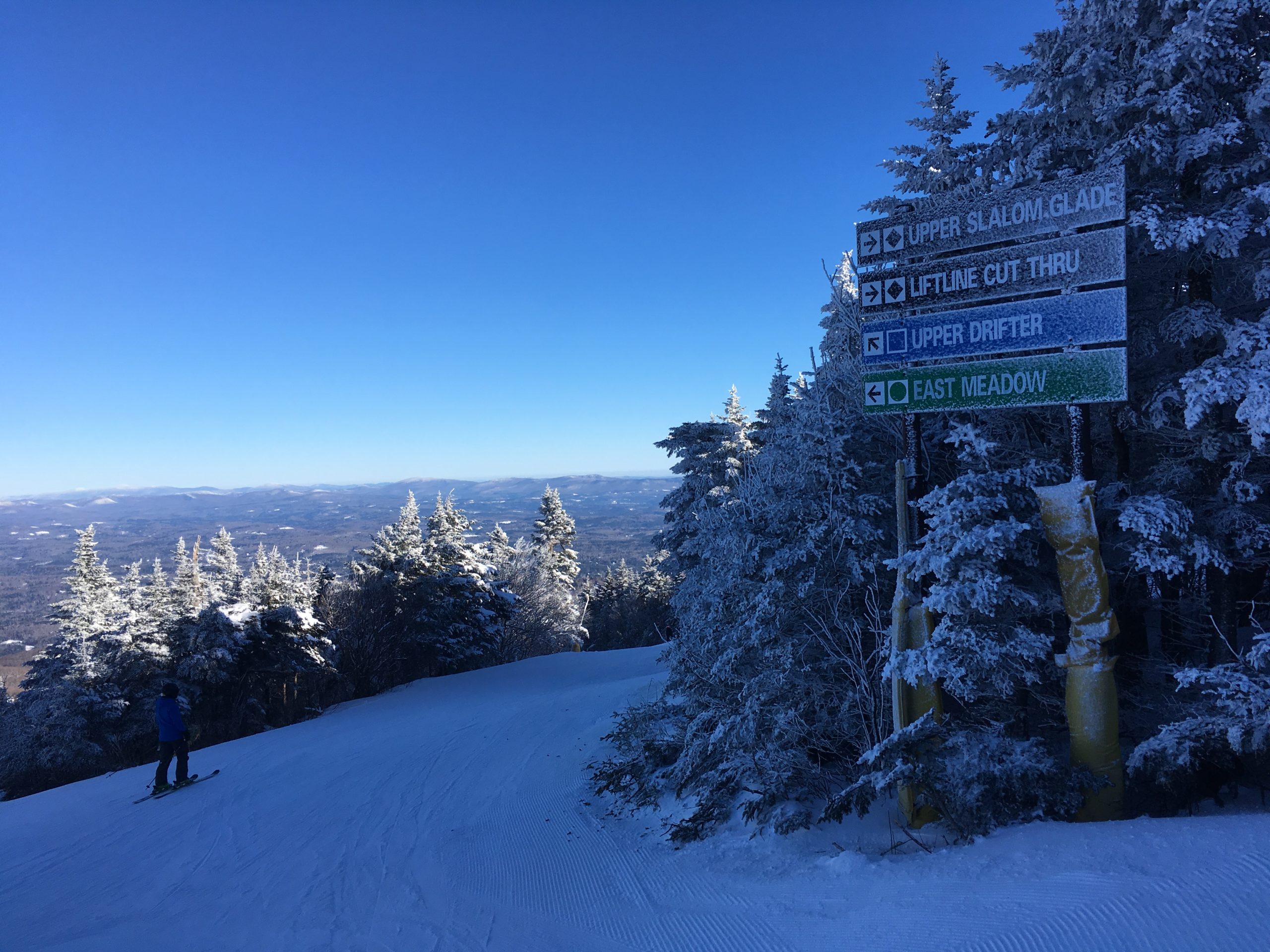 There was great snow on the ground up north in early December, and I readied my gear to head up there. Then work got in the way. Life got in the way next. A four letter word (rain) befell the north country. The holidays were on the doorstep. So despite great early season conditions—and intentions—I never made it to the slopes prior to the New Year ringing in.

Yesterday I went north to Stratton. It was a beautiful sunny day with temps to start in the low twenties. The wind was a bit stiff at the summit, but not so strong as to affect lift operations. Crowds were light, at least until late morning when things got a bit busy.

It was only busy because the entire mountain was not accessible. Skiers and riders congregated on open trails, making it seem busier than if 100% of terrain were available.

The snow was quite good on open trails. Sure, there was a patch of glacier ice here and there, and an occasional sparsely covered piece of ground. But overall conditions made for good skiing and riding.

I started this ski season with two new gear items. The foremost was a new pair of Dalbello DS 110 boots. I have been in Dalbello boots at a 130 stiffness for quite a while. And while I love the control they provide, they tire me out too quickly as the years click over into the future, making age numbers higher and higher.

The DS 110 boot is a traditional 4-buckle overlap boot. Dalbello reengineered the liner to make entry easier. And it is. Once my foot was slipped into the boot, I can say they were (and are) extremely comfortable. They are also quite warm. But yesterday was not a great test for warmth since it was not really very cold.

This less stiff boot let me still have great control over the skis, but did allow me to relax—be a bit sloppy that is—without actually getting sloppy controlling the skis. I can now ski longer into the day than when my feet were tucked into the 130 stiffness boots. All this was exactly what I hoped to see happen.

The second new item was a pair of Nordica Dobermann Spitfire 76 RB skis. This ski is brand new this season, and I can tell you they are a lot of fun to click boots into.

Modeled after the Nordica Dobermann line of race skis, Spitfire 76 RB inherits the basic traits of a race ski. Titanal inserts for stiffness with light weight. Full camber underneath makes the ski very lively in and out of turns. High quality metal in the edges that keep sharpness longer. Narrow waist and 16 meter turn radius make Spitfire 76 RB a great ski for those narrow, windy trails typical of New England ski resorts.

Needless to say, I had a blast on the Nordica Spitfire skis. If you are intrigued by these skis—and you should be—they are available as a demo ski at Avie’s Ski / Sports. I took them out for an extended spin yesterday to see how they performed. Last year I tried them out during an “on-slope” retailers demo show, but only took a few laps on them. I remembered liking them, but needed an update to my memory chip.

If like me you best enjoy carving up the groomers, give the Nordica Spitfire 76 RB a trial run over the snow. They are fantastic on the big, wide groomers for setting out big, wide carves. And they are lively and fun on those narrow trails twisting and winding their way through the woods.

I am looking to down-size from the Volkl RTM 84 skis I have been on for the past 5 or so years. I am looking for a ski a bit narrower and easier (less exhausting over a day of skiing) to tip into and out of turns. Something with more camber so that they are a bit more lively underfoot. Nordica Spitfire 76 RB just might be the ski I am looking for.

Conditions to the north are not phenomenal, but not bad at all. The bad part is that the resorts are not 100% open. The trails that are open however, are all in good shape.

It looks like incoming weather may start up as a bit of a mixed bag up north, then changing over to snow. Depending on where, it sounds like 6 to 8 inches, and maybe more, could get dropped upon New England ski resorts up north.

Let’s keep our fingers crossed for lots and lots of snow, and the dropping of many, many ropes that yesterday were keeping trails off limits to skiers and riders hungry for more terrain.

When the opportunity comes, get out there and hit the slopes. If you are a skier, stop by Avie’s Ski / Sports and take the Nordica Dobermann Spitfire 76 RB skis out for a day on the slopes.