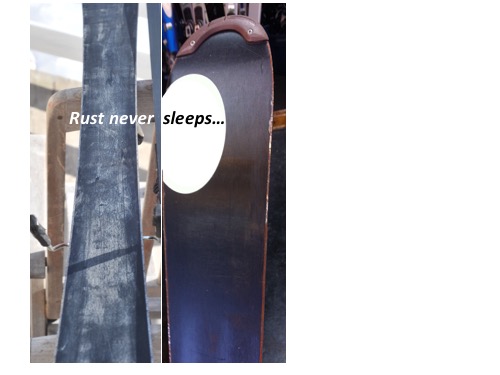 Spring has sprung. Days are longer and temperatures are climbing. Flowers are popping through and tree and shrub buds are swelling. And yes, the snow is melting.

While that does not mean that the ski and ride season is over with, it does mean that it is winding down. If you are, for whatever reason, already at the end of your ski and ride season, then it is time to do a couple very simple tasks to ensure that next winter your gear is ready to go.

The thing you do not want to do is simply chuck your boots and skis or snowboard into a closet, basement, attic, or whatever lonely space you chuck your gear into. They will be very sad come next winter. They will look like the image on the right side up above. Rust will form, ski or deck base will get a whitish, sickly color, and boots will be disfigured and maybe even kinda smelly.

If you want to avoid all that—and your gear looks like the image on the left up above—here are a few things to do that will keep a smile on your winter toys.

Lightly buckle your boots so they keep their shape. Take a damp rag and wipe the outsides and the metals buckles to remove dirt. Do the same with your skis or snowboard. Put them in a space that is NOT subject to lots of humidity. In other words, a dry, airy space.

Do everything under GOOD, plus the following. Pull the liner out of your boots and be sure it is allowed to completely dry and air out. After a day or two of freedom, put the boots back together and store them as above. Take your skis or snowboard to Avie’s Ski / Sports and have them do “The Works.” This will sharpen the edges, recondition the base and repair any major cuts and gouges, and put on a coat of wax. Put them in a dry spot for the summer and next season you are ready to go.

Do all the above, plus the following. While you have your boot liners pulled out, give them a spray with a deodorizing, non-scented boot/shoe product. This will keep them nice and fresh. Once they air out for a few days, put the boots together and store them in a dry spot. Bring your skis or snowboard to Avie’s Ski / Sports and ask for them to be “Summerized.” We do The Works as above, but iron on a coat of wax and leave it there. That wax protects the base as well as soaks into the base so that any wax applied after lasts that much longer. Put your skis or snowboard away for the summer. Come fall bring them back to Avie’s and we scrape off the wax and then brush the base out to a beautiful luster. It doesn’t get much better than this.

Sure, you can do nothing and chuck your gear into that convenient dank, dark hole for the summer. Yes, Avie’s can resuscitate your skis or snowboard come fall. But at a price to your gear—we have to use a pretty heavy hand to remove deeply embedded rust and to restore a base that is heavily oxidized. That heavy handed method removes a couple years of life from your gear. Sorry, but we cannot “de-stinkify” boots.

If you have relatively new gear, or gear that you really like, consider treating it to an Avie’s “Spa Day” at the end of the season. That gear gave you it’s all and put a smile on your face all season long. Giving it a nice tune up before letting it relax for the summer is a very, very nice way to pay-if-forward.