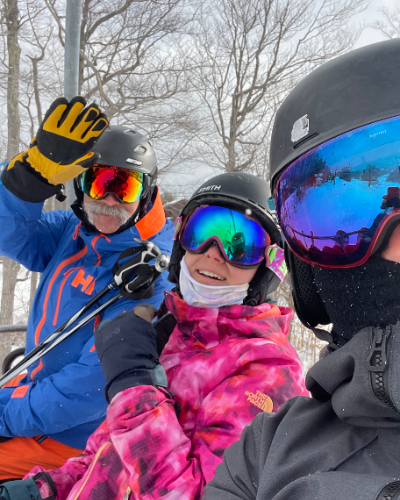 Conditions were pretty incredible overall. There was 2-3 inches of fresh fluffy stuff on top of the trails. While not a real “powder day” the fresh stuff made for making some nice turns. And it made it feel fresh and wintry.

To top it off, they had snow making guns blasting full force on a couple of trails. Those trails were necessary connectors between summit and lower mountain areas, so it’s nice to see that they want to preserve access for as long as possible. Thumbs up Okemo on that one!

It snowed most of the morning, with a break for a splash of sunshine followed by more snow. Unlike most typical days where it starts colds and warms up, it started warm (28 degrees) and then the temperature dropped throughout the day. And the wind picked up from a gentle breeze in the morning to a gusty full out wind by afternoon. Blowing fluffy snow, especially at the summit, made for intermittent near white out conditions.

Despite it being weird that it got colder as time when on, the day was a blast. The crowds were non-existent and the fresh snow made for almost perfect ski and ride conditions. And ski and ride we did. Jackson Gore was probably our favorite place. Practically no one was there. We made several top-to-bottom runs where we saw maybe another one or two people on the trail.

While there were a few places, as the day wore on, that glacier ice poked through, those patches were easy to avoid. The fresh snow lumped up in the middle and spread out along the sides. Pure fun regardless where skis pointed.

Bottom line? Go have some fun on the slopes. Conditions are good to great.