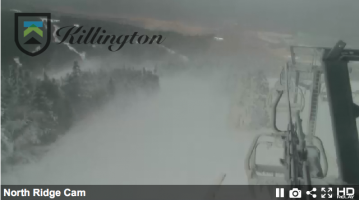 Central Vermont got about a half a foot of snow Sunday night. Then things got colder and stayed colder. Especially during the night. And it snowed some more. A lot more. In fact, a real lot more. It just didn’t exactly snow everywhere in Vermont.

Killington opens for the season today, Tuesday the 25th of October. If you are a season pass holder, you can hit the slopes as soon as they drop the ropes. If not, then you get your first shot Wednesday morning. Skiing and riding are on 2 trails off the North Ridge Triple — Rime and Reason.

While I always enjoy a run or two down this pair of trails, it isn’t a very compelling reason for me to drive 3-1/2 hours in one direction so I can hit the slopes. While I admit to thinking about skiing come late July/early August, I’m not that hungry for a few turns. Not just yet.

It is heartening though to know that the time of cold is coming, and that snow is falling, both natural and man-made. And it is pleasing to know that a few trails are filling up with that beautiful white stuff. And it is nice to know that for those that choose, they can make a few giddy runs amidst the rapidly fading colors of autumn grudgingly giving way to winter.

It means that soon enough ski mountains throughout the northeast will have lifts turning on a daily basis, and a 3 hour drive in one direction will no longer be a valid excuse for not going. Given that most ski mountains shoot for a Thanksgiving holiday opening, there is less than a month before the season hits full stride.

In the meantime I will be pulling the summer wax off my skis, checking the edges, and slowly stowing summer play gear while pulling out my winter “stuff.” I suggest you do the same.

We will have the tuning shop at Avie’s up and running by the end of this week. Given that it’s likely to be way less than a 3 hour drive in one direction, you don’t have a valid excuse not to bring your skis or board to the shop to be tuned. Or check out some new stuff and start the season off in a whole new direction.

So stop in at Avie’s and see all the new gear for the season, and check out the newly expanded sales floor. Bring your gear on in, or get some new stuff, so we can get you set up to take advantage of every possible moment that you are able during the 2016 / 2017 ski and ride season. It’ll be here before you know it. In fact, according to the Killington calendar, it already is.