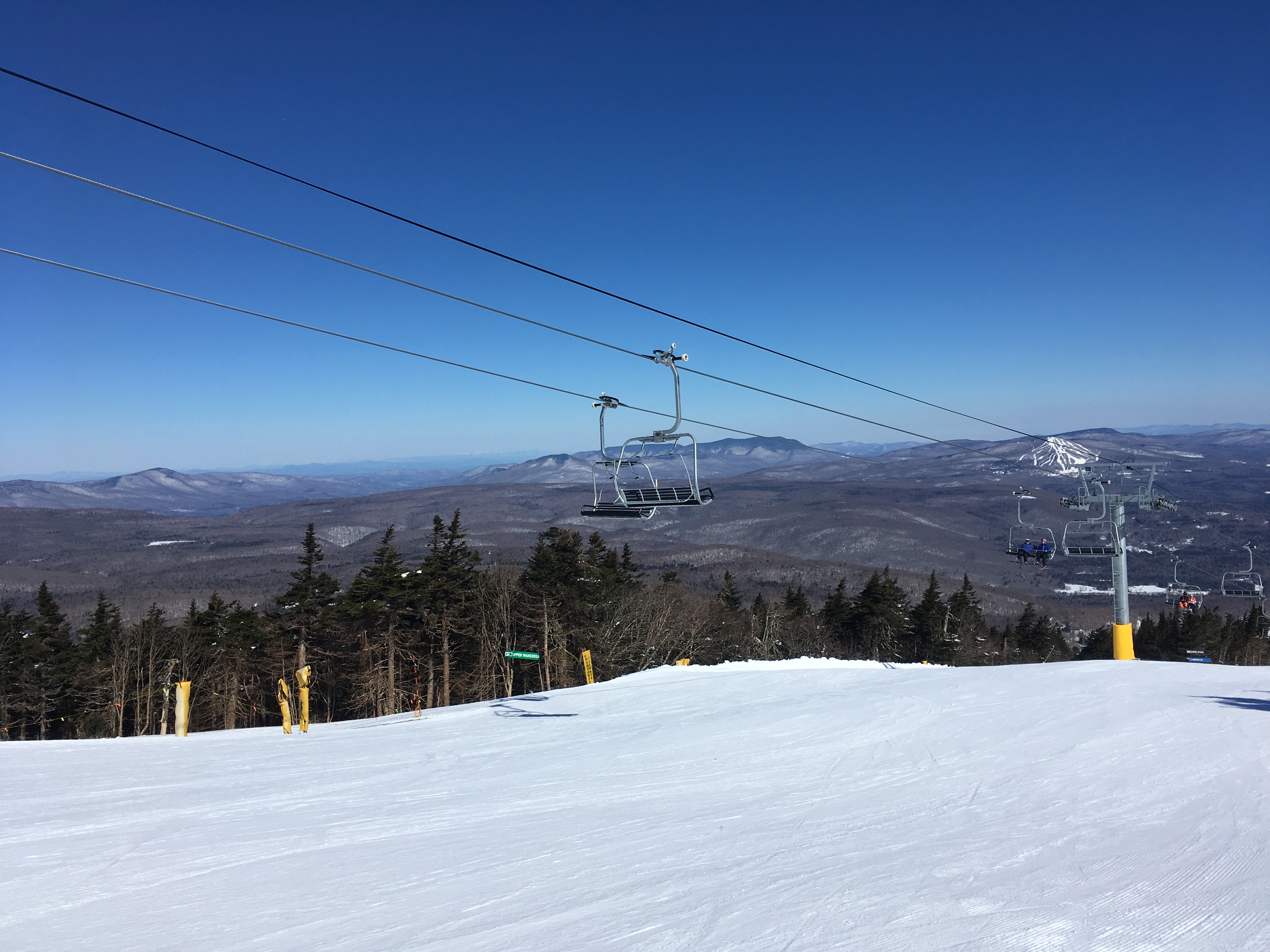 I decided to make a run up to Stratton this morning. I’m glad I did. It was Strattonspheric. That means it was other-worldly good. Outta-this-world good.

Look at the picture, taken from the summit near the top of the new Snow Bowl lift. I think that’s proof enough that my decision was a good one. A really good one.

That’s Bromely Ski area center right. Way off in the distance, not really noticeable in the image here on the webpage, unfortunately, you could see the snow-capped twin summits of Camel’s Hump. Stowe off behind that—I think. That’s how crystal clear a day it was.

Okay, so you give me a high-five for a great day of sightseeing in Vermont. What you really want to know is — How was the skiing?

It was phenomenal. Stratospheric even. Despite it being clear and sunny, it was cold. In the teens at the summit and mid-twenties at the base. And it stayed cold. With a breeze that wasn’t quite a wind. The snow stayed firm-and-fast on the upper mountain, with lower mountain trails softening up just a bit. Not so much as to be sloppy or “grabby.” Just nicely soft.

The snow they received over this past weekend gave the mountain operations folks a chance to make a major “reset” on the trails. The St. Patrick’s Day Avie’s bus trip to Okemo experienced “groomed variable surfaces,” which translates to “chopped ice.” Not that those conditions were bad, they were actually quite good. But the snow today at Stratton was delicious, good old packed-powder. It was spectacular.

Grizzy—a Double-Diamond to the left off the Ursa lift, was fully groomed top-to-bottom. First time I had seen it groomed this season. It was spectacularly fun. Multiple times. As was Polar Bear, Black Bear, Tamarack, Standard, Spruce, Drifter, Sunrise Supertrail, and Down’easter. To name a few.

Time to Act Is NOW!

Bottom line is that conditions are incredibly good right now to the north in ski country. Take advantage of it. Read this, then call in sick for tomorrow. Go skiing or riding. It will be worth the effort. You won’t regret a moment.

Some warmth creeps in towards the end of the week, which will make for some good spring skiing and riding, for sure. But if you like your snow-covered slopes to be firm-and-fast, go tomorrow. Leave tonight if you can so you can’t change your mind.

Yes, the ski and ride season is winding down. Resorts will be reducing access day-by-day, and trail counts will dwindle. All the more reason to get out there one more time. Or two. Maybe three?

It’s on my agenda. Maybe see you out there.