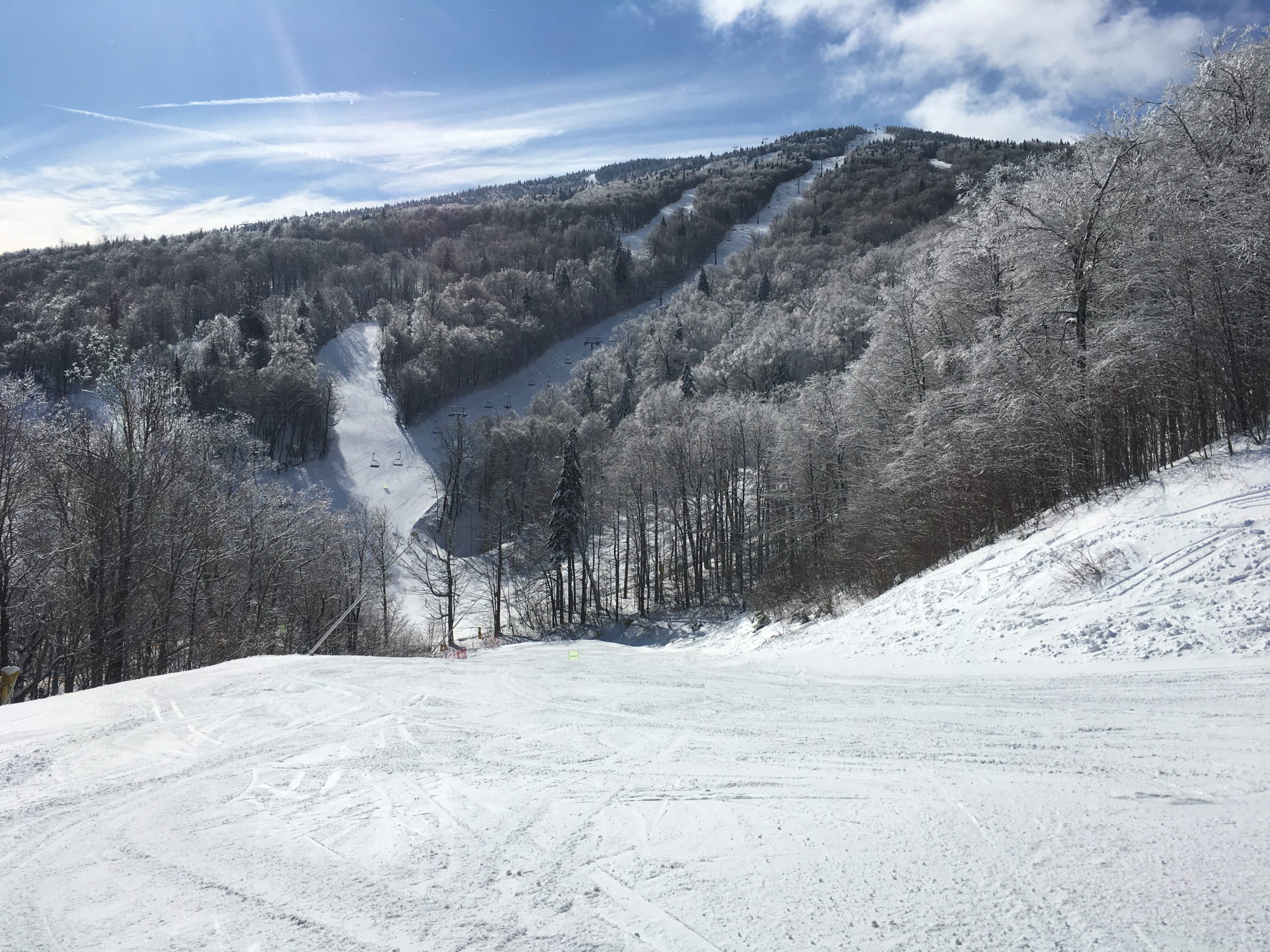 Today I took the opportunity to dash up north to check out conditions. I stopped in at Stratton figuring it would be a good gauge for what conditions are like at least through the lower and central portion of Vermont.

This was not done with the intent of having fun. I did this so that you would enter into President’s Day Week having an idea of what to expect. Of course, I will admit that my scouting trip was indeed fun. Maybe even a lot of fun. But I tried not to let it.

It was nice to see on the drive up that Vermont now looks like Vermont should look during winter. The hills are draped with snow and the sides of roads are lined with snow piles. Not massive piles, but at least snow. There is also snow in the woods now, so the landscape is a pleasing white everywhere you look. It wasn’t that way when I was up there last week.

Much of Vermont has received about a foot of snow over the past week. With more expected overnight tonight and into tomorrow. It looks like that should leave another half-foot or so of snow to play in. And predictions are for a major storm in the early portion of next week, bringing we hope a major dump of white stuff.

I started my day at the Sun Bowl. A quick look up the hill showed that trails had been groomed, but another couple inches of snow fell post grooming operations. Groomers with a bit of fluffy frosting on top sounded pretty tasty.

I made my way over to the Snow Bowl area to stretch leg muscles stiff from the 3-hour drive. When I got to the summit I found that the wind was pretty stiff, and there were large areas where all the fluff had blown off. The uncovered groomers were crusty on top, a result of the small amount of wet precipitation that occurred between the morning and late day snow events of yesterday.

Well that pesky fluffy snow had to go somewhere, and indeed it lay in patches and drifts on the windward side of the exposed slopes. Trails that were tucked between trees and out of the wind had a nice dusting of fluffy stuff.

The nice thing was that there was plenty of snow. Everywhere on the trails. Not a hint of glacier ice did I see. Conditions were fast and firm, with the firm part being a bit crunchy. If edges were sharp however, which you can bet mine were, then the groomers were a very fun thing.

As the day wore on the wind dropped off a bit and snow got distributed all across the trails, making for some very, very fine skiing and riding.

Right now conditions are very, very good. The couple of recent snowfalls have topped off the trails quite nicely. Yes, there was a little bit of wetness that hit the slopes then froze, but it was just a little. And, as noted earlier, if your edges are sharp you will have lots of fun.

Dull edges? This is New England! You should always have sharp edges. Always. The every single time you go out kind of always.

Another moderate snowfall overnight tonight and into tomorrow will make things even better still. And there is no warming in the forecast either, so all this wonderful snow will stay around for a while.

Just a reminder that the Avie’s Ski / Sports Sunday Ski & Ride trip on February 16th heads to Bromley Mountain. That’s right next door to Stratton, so conditions will be equally as good. By Sunday, probably better.