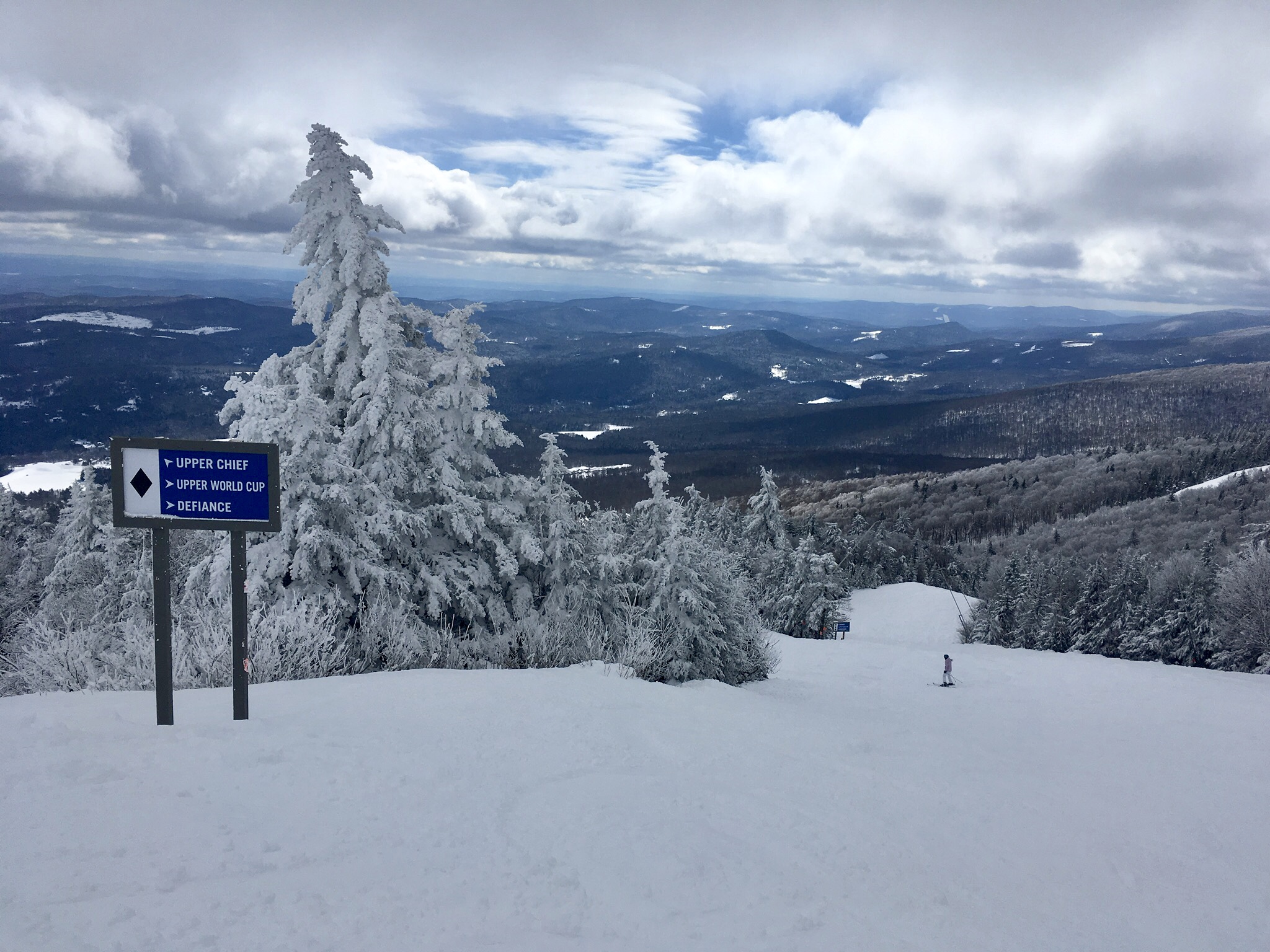 Despite the fact Avie’s bus trips are done for the season, the urge to let gravity yank me downhill is still impressively strong. And my leg muscles are finally tuned to the point where at days end there is only a blissful ache instead of throbbing pain.

So, I pointed north and had the great pleasure of being at Okemo yesterday. The resort is still 100% open, and there is plenty of snow, though they are done with snowmaking for the season.

I was clicked into a pair of Blizzard Quattro RS skis, which thrive on firm-and-fast. So I started my day over on the South Face to hit it before the snow began to soften. I put down first tracks on every open, non-mogul trail. I had first and second tracks on Blind Faith. If you get the feeling there were few people there, you got it right.

I stayed until about 10AM when the lower parts of the trails began to soften, and a steady stream of skiers and riders began to show up to take advantage of that softening. I worked my way over to the Main Face of the resort and hit all the classics—World Cup, Chief, Defiance, Nor’easter and Jolly Green Giant. These trails were still firm-and-fast, though the ice chip/”Death Cookie” mix—which graced most slopes on the South Face—had been skied over and chopped up to make the glide a bit less tooth rattling. I liked Chief and Nor’easter so much I did them each a few times top-to-bottom. I caught a big air (for me) on World Cup, and landed it! Usually airtime for me results in spectacular yard sale events, but not this time.

I went next over to Solitude, and the surfaces there were very smoothed out. What is typically called “dust-on-crust” though the “dust” was a pretty good coating. I took a run on all the trails in Solitude, then headed back for a few final runs down Chief to make some big carves in the softening snow.

It was a blast. There is plenty of snow left to have plenty of fun on. Yes, there are a growing number of hazard markers gracing the trails, and bald patches are sure to be turning up as the warming days march onward. But for now you can get the best of everything. Firm-and-fast to start the day with some high speed runs, mellowing in mid-morning as the snow softens, and then outright spring skiing and riding in “Hero Snow” late morning through mid-afternoon.

Conditions are still phenomenal up north, so there is no reason to toss your gear in a corner for the spiders to play on until next fall. Get yourself up north again while the getting is good. And it is good.

I’m still smiling, the morning after my day of play at Okemo. Since smiling and being happy are good things, I’m planning on doing it again. And again. Hope to see you out there.